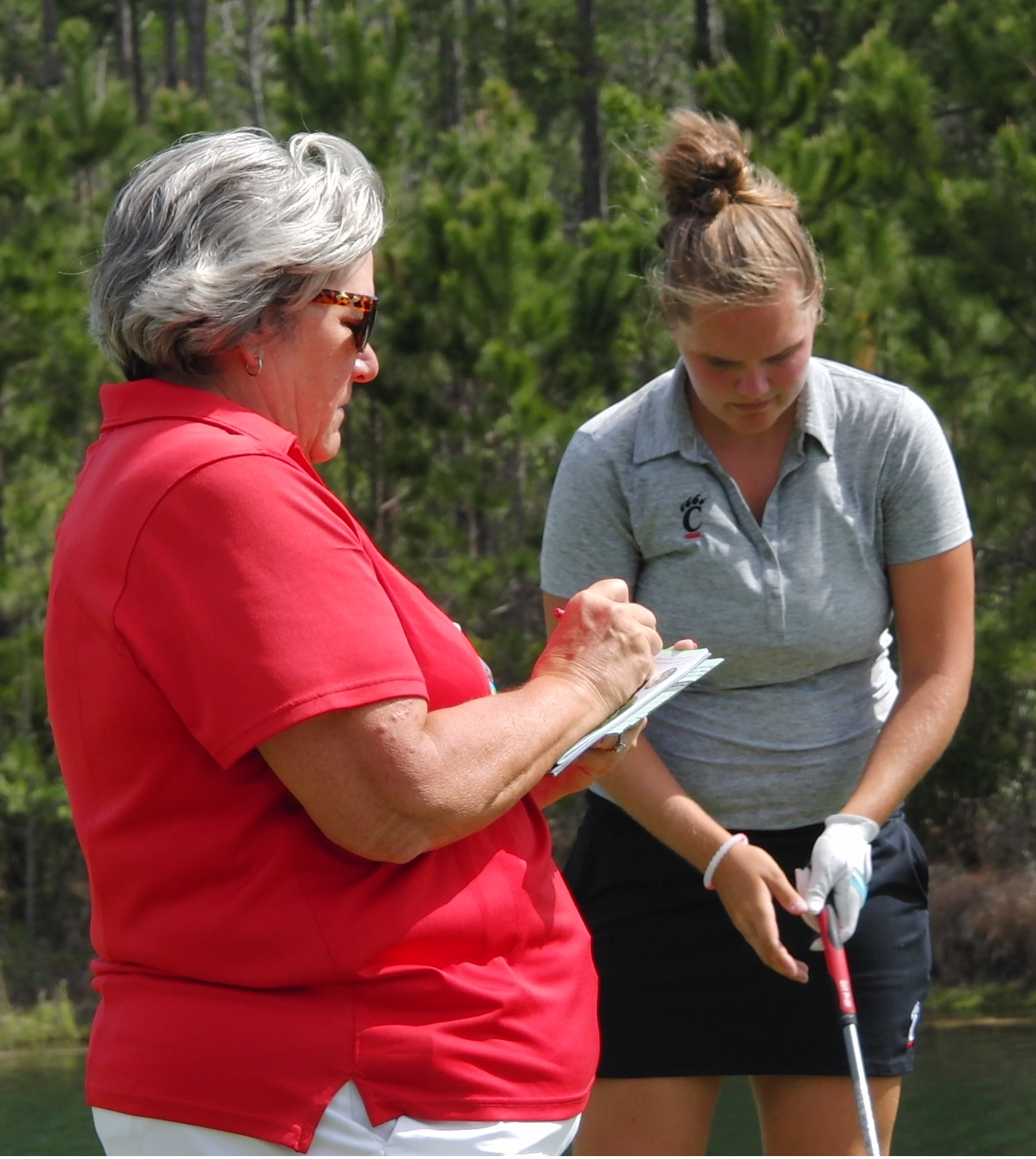 Self-awareness is not only important for an athlete, it’s more important for the Coach.  Let me share with you a situation I had with an athlete.   I have been working with Alex on the course the past few days.   Alex is a seasoned athlete and can run EPS better than any player I’ve ever coached.  Why?  He’s been training with me for 7 years.

I noticed his times were getting slightly long. Maybe +2  seconds on his full swing shots (these are shots Longer than 30 yards).   We discussed it for a few minutes, and he agreed, however, the times didn’t change.  You see he was getting long in time after his point of alignment (just after blade to the ball, eyes to the target, eyes to the ball) and kept adjusting his feet and ball position with an additional 2+ seconds.  Then he would confirm and hit the shot.

So today on the training deck we were blue printing his wedges using the ES14.  We do these three times a year with each athlete.   I let him get to work running the wedge performance system.  And told him I would check back in a few minutes.

He was running his full MP on each shot and I noticed his times were the same (+2 seconds) as on the golf course this week.  So I asked him, “Alex, what’s up with you taking so much time, adjusting your feet and ball position after your Point-of-Alignment?”  He replied “I’m just trying to get comfortable because I’m just not fully committed to the width of my stand and ball position.”

When we talk about imprinting – it’s very important to be mindful of what we are doing in our training.  Alex was actually imprinting this in his training and not even aware he was doing it.   More importantly he was transferring this to the playing environment.

I immediately stopped and again asked to confirm he wasn’t comfortable with his stance and ball position.   Yes – he confirmed!

I asked why you committed to the shot aren’t.

I’m uncomfortable with my ball positon and width of my stance.

How do you plan on getting comfortable and committing to this?

In the Pre-Load and Commitment Phase!

That’s Correct!  But you’re not doing it.

Can you give me more details of the solution?

Yes!  Are you telling me that you are pre-loading the shot and going through the commitment phase of the exact shot you want to hit?  From the shape of the swing, impact, stance, and ball position.  I would tell you—this needs work.

So you are telling me that I’m not doing that?

Correct – In the Pre-load of the shot your imprints show me — your feet are not the same and nor is your ball position, and the spot of impact where you want the ball, is off as well.  None of this is exact in your Preload.  I would recommend rehearsing exactly everything to the finest detail of the shot you want to hit in the Preload.   This sets up the commitment phase before your Point of Initiation.

Alex got to work on these details in his Preload and his commitment phase went through the roof!  His times were spot on at 15 seconds.  Not to mention, his shots were GREAT!

He even took it one step further on the Reload.  He immediately reinforced the details with the width of the feet and ball position and the great swing.

Summary – this is a game changer for the athlete as well as the coach.  The emphasis is always on the coach, keeping a watchful eye on the 3-Key Performance Factors.  How athletes Think, Train, and Reinforce.

Coaches and athletes always have to keep their eyes up and boots on the ground, especially if we want to move the needle with our athletes.

Shawn, I have not contacted you before, but I think your “Hump Day” series have been the best I have seen. I am an 81 year old who has been a consistent bogey player for the past 15 years. I play from senior tees and rely on the short game as my drives are only a “straight “ 200 yds. As you would know the 380 + par 4s are tough for me. I have been a student of the game since I started late (age 30) after a semi-pro baseball career. Twenty years ago I wrote a book titled The Golf Primer: a manual for the adult beginner. Through that labor of love, I spent time with Gary Wiren, Jim Suttie, Greg Ortman, Michael Hebren, Fred Griffin, Dave Pelz and others, but none were more genuinely helpful than your “Hump Day” tips. I still do a little basic teaching to some retirees who want to get into the game or return to the game after years away from the links.