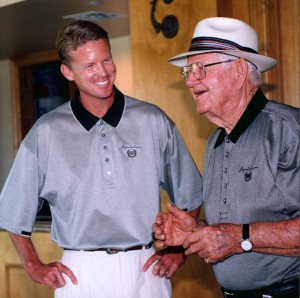 This week the tour moves to Irving, TX for the HP Byron Nelson Championship. For three years I made the Four Seasons Resort my home. I had the great pleasure of working for Byron Nelson as the Director of his golf schools from 1998-2000. During that time, Byron shared many life-long lessons with me. Each season Byron was asked by Augusta National to hit the first tee-shot at the Maters. In March Byron would begin to hit balls each week gearing up for his one tee-shot. You have to remember he was in his late 70’s at this time.

On one particular day, he came out to hit balls. Unfortunately, he was struggling with his ball striking and asked me to watch him hit a few balls. You see all he was hitting was his driver—because that’s the shot he had to hit at Augusta. He turned to me and asked what I thought he needed to do. His ball flight was a little weak fade. You have to understand that at that time Byron had gone through a series of surgeries in previous years with two hip replacements and his body had a tough time accepting the hip replacements. However, this didn’t keep Byron from doing his duty to Augusta National and hitting the ceremonial tee shot at the Masters.

So there I am with Byron Nelson asking me for advice to help him get the ball flight on track. I walked around in front of Byron (face on) and noticed his ball position was positioned well forward of his left toe. I asked Byron if I could be excused. I ran into the office and grabbed his famous book Byron Nelson’s Winning Golf and flipped to page 38 (stance & address). This is where Byron is setting up to his driver. I asked Bryon about the picture and his ball position. He immediately replied, “My ball position is too far forward, and I can’t hit the inside portion of the golf ball.” He shook his head with disgust–proceeded to move his ball position back like the picture in his book and began striping the ball.

He turned to me and said, “Shawn, sometimes we get off track and don’t even know it, and I guess that’s the way life is. We hit balls every spring before he went to the Masters. He would hit balls as long as his legs and hips would hold him up. Byron was committed to perfection—even if it was just to hit one tee shot at Augusta. What a lesson that was.

Dear Shawn: I have been with your training programs (videos) now for about 1.5 years. I have 3 of the training videos. The last one that I bought- "Two Steps To a Perfect Golf Swing" is the best training video I have ever used. I had to watch the video many times and go practice and I was getting close to what you teach, but it took time to get it to cover up the flaws I already had in my swing. The past week or so I have gotten a better “groove” of what you are teaching and can score better, feel better and have the confidence that this will work. I am very happy with the results that I am having. THANK YOU VERY MUCH. I am 75 years old; been playing for 20 years; have a 13 handicap and have improved my golf game thanks to your video. I usually shoot 85 and up, but now I have in the past few days shot 79, 82 and today an 80. Kudos to you.