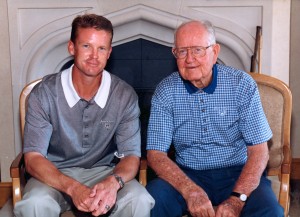 One of the accomplishments in my career was working alongside Byron Nelson as the director of his golf schools. To this day, it’s still one of those things I cherish the most. One day our school was in session. Byron would always have lunch with us around 12-noon. During lunch, he always had photos made with each golf school participant in front of the fireplace and signed books for everyone.

On this particular day, Bryon was ready to hit balls. You see—this was a few weeks before the Masters, and he was getting ready to hit his opening tee shot at Augusta.

So he motioned at me and said, “Shawn I think I would like to hit some drivers” and in a blink of the eye we were ready. Byron was on fire. He was striping every shot with a slight draw. That was his signature shot. He would take a break, answer a few questions and hit a few more drives.

He was just about to finish and ask if anyone had one last question. One of the golf school guests raised his hand and politely asked, “Byron—as recreational golfers we always have a tendency to slice and your team of instructors are doing a wonderful job of helping us understand why we slice and more importantly learn to coach ourselves. I’m curious—when you were playing on the tour and sliced the ball— what did you do when you had troubles slicing the ball?”

Bryon looked at me—that was the sign to put a ball on the tee for him to hit. He rared back and smoked one right to left (slight draw) and turn around to the school attendees and said, “Let’s get something straight – I never sliced”.

Everyone roared and cheered. I looked at Byron, and with that million-dollar smile he said, “I think that’s enough Shawn”. What a great day that was.

Just love the simplicity of your teaching and the common sense way of instructing. Makes it so much easier for us weekend hackers who want to do the best they can while having fun and enjoying the game. Thank you!