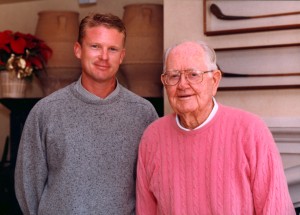 I had the opportunity to sit and chat with Byron on a many occasions when I was directing his golf schools.  One day he came out to the school and wanted to hit a few balls.  After he hit a few balls, I had a chance to bend his ear.  One thing you have to remember was that he played in the 30’s & 40’s. I would ask a lot of questions to understand what it was really like in those days.  Anyway, we were sitting at the school on the patio chatting about life.  I asked him how much he practiced.

He replied, “ I would hit balls on a regular basis working on timing and balance.

I was very curious, so I asked, “Byron how often did you hit balls after your tournament rounds?

He replied, “ Shawn I never hit balls after my tournament rounds.”

I shook my head with disbelief and asked why.

Really getting on great with the “Repeating Swing BLUEPRINT”! As you said, it clarifies the “How To Build a Repeating Swing” a lot better and I am really enjoying the drills as I now find them much easier to understand them. Already after just a few days my ball striking has improved and I am having to re-adjust to the additional distance I am achieving with each club.

I have been working with your system for 5 months now. I have sought advice through regular PGA instruction but seemed to hit an impasse. I grew tired of my golf game before trying your system. Past history: Scored in the 100's. Inconsistency with all golf shots. Today: since using your system, consistency is improved. I can play from my misses. I am now scoring in the high 80's. I have won my 1st golf tournament and I am in 2nd place for club championship. I feel that more improvement is possible. My ulterior motive is to play Pebble Beach in 6 months. Many thanks. Your system truly works!!!

Thanks Shawn! I ordered your Repeating Swing Blueprint package. I've learned more about the golf swing from that video than I've learned from all the golf lessons I've had over the years. So thanks a lot! P.S. I'll order the distance trainer next week.